The Northwest Territories (NT) of Canada encompass forest, mountains and islands. Beyond the remote tundra is the Arctic. Nuna Training Technologies, a private vocational school located in the Province of Saskatchewan, Canada, navigates the remote lands to bring heavy equipment training to several outlying locations.

A wholly owned subsidiary of majority Inuit owned Nuna Logistics Limited, the company has been involved in most major earthworks and mining projects in the Canadian Arctic for the past 25 years. Nuna Training Technologies has been using simulators for the last 15 years. As simulators became more mobile, the opportunity to take training on the road became a reality. Bob Huculak, a certified instructor and Manager for Nuna Training Technologies, headed the effort to find the right simulators. Huculak’s roots run deep in the earthworks and mining industries—40 years of experience. For the past 17 years he has been with Nuna, including operator training and developing training standards. Approximately 100 students per year go through the programs that include simulator training, with the majority of the students completely new to the earthworks industry.

The majority of Nuna’s trainers are Original Equipment Manufacturer (OEM) trained. “Our trainers have been directly involved in projects across the North and use that experience to augment the simulator based programs, understanding the actual needs of the frontline supervisor and using the Cat Simulator program to achieve those objectives,” says Huculak.

While simulation has been a part of Nuna’s program, the first simulators were large and not easily mobile. Training was needed in some remote locations that were not possible to reach with their current systems. The Management Group at Nuna wanted to expand the program but not without simulator training, so they began looking at new solutions.

When vetting simulator products, Nuna wanted something that was not only able to travel, but also economical. “Value for dollars invested” was the standard that products would have to meet. In the specialized market, and based on Huculak’s years of experience, modules like the Walkaround inspection featured in Cat® Simulators, were a high priority. “After looking at various makes and sizes of simulators, I found that the value per dollar of investment was the highest with the Cat Simulators,” says Huculak.  A custom fifth-wheel trailer and truck house the simulators for mobile travel.

Program participants are selected by the client. The first step in facilitating a program is to establish a benchmark for each student. To accomplish this, several benchmarking methods are used. The first is a personal introduction to determine prior experience and abilities. Once this is complete, students learn powered mobile equipment general skills. The program is presented in several training formats including a detailed lecture and an optional computer-based program. This allows the instructor the opportunity to evaluate the initial benchmark for the student based on written exams, with the option to administer oral exams.

The next phase of the program utilizes the Caterpillar eLearning Career Development Series (computer-based training). Again the first sessions were instructor led. As the student gains knowledge, the series becomes more self-directed with the objective of building confidence. Continuous evaluations determine their degree of success as they progress. The PME (powered mobile equipment) general skills and Caterpillar’s eLearning serve the students well as a stepping stone to the next component in the program.

Once the students complete the first phase of the program they move to the simulation component. With the prior knowledge gained as a foundation, students are able to quickly navigate the Cat Simulator format.

The key components of the training program consist of classroom and simulator training.

Instructors monitor the results of each segment and task. Utilizing each session report, the instructor works directly with the student to ensure the student understands objectives and how to achieve the best result for the assigned task. In addition to Cat Simulators, its companion eBook training is introduced into the session. The program also instills the value of the machine Operation and Maintenance Manual. A review of the manual assists the students in understanding the machine features and capabilities; capacities, terminology and limitations.

Huculak finds that the Cat Simulators Walkaround module is a key component in developing an understanding of what key machine parts are looked at during an inspection and how to check for faults. The Walkaround is an exclusive simulation of the machine that teaches the operator the same pre-operation inspection that is performed on an actual worksite. From an employer’s point of view, each successful operator must understand the value of the pre-inspection of the machine, what to check for and how to perform the checks. The feedback from Cat Simulators SimU Campus™—the records management software for the simulator—serves as a primary evaluation tool. The student develops a significant interest in understanding the report and working to become a better operator.

“In our 15+ years of using simulation as a primary training and development tool I am always impressed by how the simulator report becomes a personal benchmark for each student as they progress. I really enjoy seeing how the students become their own competition. They shift from competing as a group to self-improvement. When this self-improvement becomes part of who they are, they develop a major key element in becoming a ‘Pro.’ Always learning and setting personal goals in safety, operations and production,” declares Huculak.

As the student continues in the program, a series of exams and quizzes are continually used to augment the simulator reports in evaluating benchmarks and progress. This information is translated in a percent or scaled value to help students understand their progress. “As an instructor we have the opportunity to witness the continued progress of the student and reflect on the skill set on day one, versus their progressing level of knowledge and understanding.”

After the classroom and simulator segment of the program are finished, the focus shifts to a field component. With the simulation being the primary component of the program, it’s time to see firsthand the value of simulation and formal consistent training. “One of the first field sessions conducted was facilitated by a project trainer who had not seen the direct impact of simulation and a front line supervisor directly from an active earthworks project. Both field instructors immediately recognized the value of simulators, based on their experience in the field facilitating training without the use of simulation,” notes Huculak.

Software records and reports the results of simulation sessions, so instructors and operators can track progress as skills improve.

A Tour is Born

While travel in the mobile trailer is possible for most areas, some areas are challenging. Huculak planned the first tour of its kind to reach some of the most rugged country in Canada. Five locations were chosen for new operator training: Cambridge Bay, NU; Norman Wells, NT; Yellowknife, NT; Arviat, NU and Tulita, NT. Getting the simulators to Cambridge Bay was going to be a challenge. Located on the south shore of Victoria Island, Nunavat, there are only two ways to get freight, supplies or equipment into the area: either by container ship in the summer or aircraft any other time of year. Training was needed in February so that meant air travel for the simulators. There are three different types of planes that can make the trip and no guarantee of which one it would be. Nuna took steps to build custom crates to hold the simulators that would work for transport on any of the aircrafts. The crates left Saskatchewan by truck to Yellowknife, where they would await shipment to Cambridge Bay. Once they arrived at their destination, they were reassembled for training. “The primary focus of the tour was to provide newcomers to the industry with basic skills and tools to find an entry level position in the earthworks and surface mining sector or municipal sector,” says Huculak.

The simulators went from Cambridge Bay to Norman Wells. They traveled back to Yellowknife by barge and on to Tulita. The whole tour lasted four months, with a total of 30 students attending for multiple days at each location. Each person trained during the tour made an impact on the companies they work for. In one instance the frontline supervisor couldn’t believe how a young student with no prior experience grasped and completed a slot dozing exercise. In less than an hour they were able to carry grade made of a cobble-based material. Facilitators were extremely impressed with how quickly the students adapted from simulation to the actual machine.

Huculak wasn’t surprised by the feedback. “As far as seeing the value of simulator training prior to actual hands on, I have been very fortunate to witness the value.”  He recalls going into many northern communities on numerous occasions and seeing firsthand the transition from simulation to hands-on iron. “One instance involved an excavator. The fellow had no prior experience at all, but after about six hours on the simulator we moved him to a machine. The owner could not believe how this fellow got into the operator station and proceeded to take full control of the machine in a smooth confident demonstration.” He has seen over and over: once supervisors have the opportunity to witness the results of simulator training, there is buy in. “The one challenge I encounter is individuals commenting on the value of simulation without ever sitting in the seat of a simulator or taking the time to review all the elements of the program and tying the learning experience to actual operator improvement, productivity and safety.”

As far as durability over the course of the tour, Cat simulators were disassembled and reassembled 10 times and traveled an estimated 9,600 km via land, air and water without any major issues or concerns.

Not only do users have a better on-the-iron experience after simulator training, there is real dollar savings as well. “After more than two decades of training, I am 100% convinced there isn’t a more cost-effective and safe method of training than simulation,” states Huculak. “When I started out as a new ‘green’ operator, fuel cost was not a critical factor like it is now, and the capital investment in equipment was lower. I recommend that you take the time to do a detailed cost analysis of the actual cost of using a piece of iron from your fleet versus the cost of simulators. It’s not hard to recognize the savings.” Huculak did a comparison, excluding the risk factor of training a new operator. “We save anywhere from $30 to $75 dollars per hour, per operator, depending on the size of the machine.” What pays a greater dividend is that with simulation, there is no risk when training a new operator. “How do you put a true dollar value on an injury?” Huculak adds. 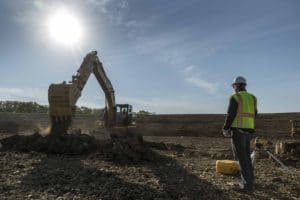 Students transition faster to the iron when training on simulators first.

The intrinsic value of developing a culture that strives for excellence within a company operation cannot be ignored either. Training and using record-keeping software to record the results of simulation sessions gives operators a method to watch their own progress. They can identify weak areas and practice to improve their skills. “When an experienced operator has the mind-set to be able to compare a set of targeted results based on specific parameters, he gains an important cornerstone for continuous self-improvement and excellence.”

Over the course of his involvement in operator training and development, Huculak recognized the value of a structured training process and the value of simulation as a primary tool for operator development. He believes as simulation continues to evolve and improve, and advancement in equipment technology moves forward, simulation will become a cornerstone in the development of new operators everywhere.